Saffron City is a city situated in central Kanto.

As a quadripoint between the contiguous routes of Cerulean City (north), Lavender Town (east), Vermilion City (south), and Celadon City (west), it is the centrimost city of the Kanto region, serving as a frequently used pedestrial passway to and from other cities within the region.

The area is made accessible by giving a Lemonade to a guard in any of the four convergent gatehouses after you have obtained the Soul Badge in Fuchsia Gym; thereafter, you will have access to all four gatehouses to access the city. Until you are allowed to use the gatehouses, the underpasses on the nearby routes must be used in order to bypass the city.

It is one of the most metropolitan cities in the Kanto region; in addition to Saffron Gym, several landmarks are located in this city, including Saffron Dojo, Silph Co.’s headquarters, and the interregional-train station.

One of Kanto’s Move Relearners can be found here in Saffron City. It is located to the left of the Pokémon Center. As always, he will charge you

A weight-lifting facility known as Gold’s Gym is stationed in the city. There are many NPCs related to the Fighting type such as trainers and a boss specialist of that type, Move Tutors that teach moves of that type, and a few other obtainable items.

Chuck will battle the player on the condition that he or she has defeated the Johto Elite Four. He will also teach the move Low Kick to any compatible Pokémon for the price of

On the left side of Gold’s Gym, you can find the Kung Fu Master.

A Move Tutor for the move Work Up can be found in the west side of Golds Gym. He will teach the move to any compatible Pokémon for the price of

A Move Tutor for the move Seismic Toss can be found in the west side of Golds Gym. He will teach the move to any compatible Pokémon for the price of

The Vitamin Seller is located on the second floor of Golds Gym. Despite what his name suggests, he does not sell any Vitamins. Instead, his shop selection comprises of single-use Battle items in bulks of 25 units per purchase.

Copycat Lamsie is an NPC that copies the team of the last player that defeated the city’s gym, in this case, the Saffron City Gym. She will battle you and award you EXP, but no money, making it a great spot to grind just before challenging the gym.

Psychic Ramona is located just outside the Train Station and will give you rewards based on your amount of Ranked PvP Wins and overall Rating.

The Guild House is used as an instructional conduit for creating guilds, as the Guild Master will instruct you on how to operationalize your new guild contingent that you meet the requirements of 100-plus playtime hours and an expenditure of

The Logo Master will provide the drawing board for illustrating your guild’s logo, using a 16×16 grid.

Kanto’s inlet of the interregional-train system is stationed in Saffron City, allowing its passengers to quickly travel to Goldenrod City in Johto.

Using the train stipulates that you have obtained the Rising Badge from Blackthorn Gym; thereafter, this service is usable in both stations for the price of

Another outlet of Saffron City’s train station is Trainers Valley, which is transportable upon registering 120 caught-data entries of Generation I Pokémon, having 38 evolved-data entries in your Pokédex, and having battles Red atop of Mt. Silver. The outcome of the battle with Red will not affect anything.

This station also subsumes the starting point of the Intraregional Subway quest.

Furthermore, you can purchase Transit Passes from the Ticket Seller inside the train station.

Saffron Dojo is an unofficial gym presided by Koichi, who is challengable both as a boss NPC and a linchpin for the dojo’s mini-quest.

At the ultimacy of battling through the gauntlet of trainers in the gym, you can challenge Koichi’s non-boss iteration; if you win, you can select a freely claimable Hitmonchan or Hitmonlee on the left and right tables, respectively. The Pokémon that you select will also bind to the tutorship access you have on Route 4; selecting Hitmonchan will unlock Mega Punch, whereas Hitmonlee unlocks Mega Kick.

After defeating Koichi and choosing a Pokémon, he will be replaced by the Koichi‘s Boss version, making the original version not rechallengeable.

A Body Slam-tutor is also stationed herein; he will teach the aforementioned technique at a price of

Silph Co. headquarters is the largest building in Saffron City, found in the center of the city.

After fleeing their hideout in Celadon City Gaming Corner, Team Rocket took over Silph Co. as their new operational base, subjugating all employees within it. The player will be required to fend off all the Team Rocket agents and scientists before the Saffron Gym is made accessible, thereby stipulating the building’s mini-quest as a prerequisite for progressing in the regional storyline.

After speaking to both Officer Jenny and the lass in front of the Pokecenter in Vermilion City, the next person to speak to for the quest is the biker rolling back and forth in front of the southern gate. Talking to him, he will say that a duo almost ran over him, and were talking of stealing utilities. This references the Celadon Department Store, which is the next destination.

A Move Tutor for the move Swift can be found inside the house between the Sylph Company and the Train building. She will teach the move to any compatible Pokémon for the price of

To the left of Gold’s Gym, you can find Contributor Hall. It is a building dedicated to the current and former Contributors of PRO.
On the second floor, you can find a Porygon next to the Frux NPC. It will play Rock-Paper-Scissors with you, but winning does not reward you with anything. 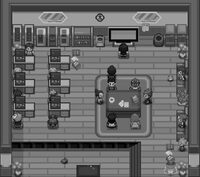 To the left of Contributor Hall, you can find Discord Headquarters. It is a building dedicated to the current and former Discord Moderators of the PRO Discord server.

On the north side of Saffron City just outside the train station, Psychic Ramona will be standing there. She is an NPC that will give you rewards based on how many ranked PvP matches you have won and your highest rating. 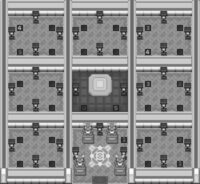 In order to reach Sabrina’s chamber in the center of the gym, a circular sequence of warp-pads must be traveled through in order to reach her room; see the pictorial walkthrough to the right for an instructional illustration.

Upon defeating Sabrina, you will reap the Marsh Badge, allowing you to advance to Cinnabar Island for the next gym in Kanto’s successional line. Thereupon, TM29 (Psychic) will also be sold by the gym-greeter for

36,000 for a bundle of five. However, the first time you purchase the TM, it will be sold at half the true value, lowering the cost to

As a Psychic-type specialist, Dark-, Bug-, and Ghost-type Pokémon are most recommendable. Irrespective of the type, powerful type-advantageously Physical moves are advisedly auspicious, due to the frailty of her lineup’s physical defense.

After you’ve defeated the Kanto League, Sabrina will be rechallangeable and will reward you with some items.