Route 25 is a Kanto route that segmentally augments Route 24, serving as its contiguous eastern outlet.

As the residential route of Bill, this area must be traveled onto in order for Kanto’s successional line of gyms to be progressible, since his mini-task must be completed in order for him to bequeath you his S.S. Anne ticket. This is required for its quest wherein HM01 (Cut) is rewarded; this must be used in order for Vermilion Gym to be reachable and to ultimately advance in the regional gym line.

It is advisable to hunt for a Grass-type Pokémon on this route for those who are preparatively training to battle Misty in Cerulean Gym, as it will conduce a more type-advantageous lineup against her.

Nearby the pond in the northeasternmost segment of the route is the house of Bill—a renowned Pokémon-researcher in the Pokémon franchise.

In PRO, his house must be visited before going aboard the S.S. Anne in Vermilion City in order to complete his mini-task; that entails finding his lost book, which can be found underneath his bed.

Once you have retrieved his book, he will reward you his S.S. Anne ticket. Do note that this is not a tangible item; it is an invisible data flag, so while it is imperceptible in your inventory, it is assuredly existent. 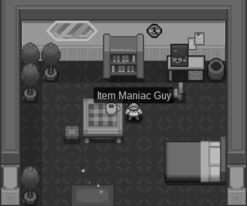 Kanto’s Item Maniac in his house.

This is also the residential route of the only Item Maniac in Kanto—a collector of Valuable Items. He will buy any valuable item you have on-hand, such as the Nugget that you obtained from the battleable Team Rocket NPC on this route.

A Stardust-vendor is stationed outside of the Item Maniac’s house.

He will sell 3 Stardusts per day (maximally) for

9,000 apiece; while this would cause a net deficit if you were to sell it to the Item Maniac nearby, since they are sellable for half the price in

4,500 apiece, this NPC is still considered facilitative for those who need Stardust for a designated daycare quest, as it purveys a more expeditious method of obtaining Stardust as opposed to digging for one.

In the north-west part of the route is a cave entrance that leads to the Entei Guardian. The entrance to the cave will however only open after the player has at least 200 hours of playtime. Once in, the Entei Guardian will fight the player on the condition that he or she is the Johto Champion. See the main article for more information.

Entei Guardian has only one level of difficulty, however its level can be compared to a medium/hard one.