Kanto is one of the mainland regions that is currently playable in Pokémon Revolution Online. It is unified to the same mainland continent as Johto, encompassing the eastern segment of it.

By virtue of the regional linearity of the game’s storyline wherein regions are traveled to in generational succession, it is the first region that players venture into. It is the predecessive region of Johto, which will be made traveable after all-eight badges have been acquired and its Elite Four bureau has been vanquished.

It is inhabited predominantly by Generation I Pokémon, being the native land of them. While a smattering of post-generational Pokémon are interspersed throughout the wild, Generation II Pokémon and onwards will be mostly unacquirable until successive regions are completed, since there is a regionalized restriction to trading early on wherein only Pokémon caught from the region are tradable in its Pokémon Center.

Kanto is the only region that is interlinked with the Sevii Islands, exclusively allowing donating members to ferry to the archipelago from Vermilion City Harbor. 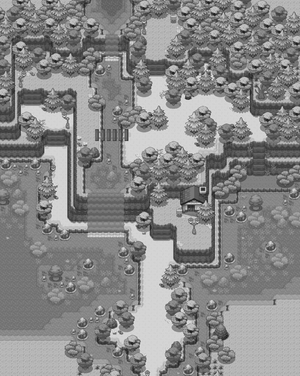 Starter Path, which is the prelusive areas that players travel through before they are spawned in Kanto.

Due to the regional linearity of the storyline, regions are only unlockable in generational succession; by virtue of that, Kanto is the first region players will enter. Once you finish the Starter Island mini-walkthrough—the introductory map that your account is initialized in—you will be spawned in your bedroom, setting the stage for you to embark on your journey as a Pokémon-trainer.

Once you have trumped Kanto’s subset of the Elite Four at the Indigo Plateau, you will have a travelable route to Johto; as soon as you enter that frontier, you won’t be able to make a revisitation to Kanto until you complete that region and every other successive mainland ones by culling all their official-gym badges, defeating their Elite Four cadres, and dethroning their reigning champions.

After you have supplanted the regional champion of the successive region you traveled to, you can return to Kanto.

Thanks to the intracontinental connection between Kanto and Johto, you can surf back to Kanto; this is negotiable by surfing eastwards in New Bark Town, which leads you Route 27—the closest area to Johto’s border within the purview of the Kanto region.

Alternatively, transportational systems can be used for more expeditious visitorial return trips to the region. The region is ferriable from Olivine City, Lilycove City and Canalave City in Johto, Hoenn and Sinnoh, respectively, disembarking you on Vermilion City. From Johto, the interregional train, which runs between Goldenrod City and Saffron City, can also be used for a fee of

These are adjunct areas—typically those that outlie the region’s mainland body and were not existentially featured in the official games but are still categorized as areas within the purview of the Kanto region.

Kanto comprises the only regional starter-Pokémon subset with more than three optional selectees—the fourth one being Pikachu.

In order for Pikachu to be selectable, you must first interact with and decline all-three starter-Pokémon options on the table; thereafter, the lightning-bolt Pokéball—a nod to the same next Pokéball that Ash’s Pikachu was cooped-up in during Professor Oak’s possessorship of it in the anime—that is next to the Pokédex-claimable desk will be selectable.

Should one select Pikachu, they’ll unlock access to a plot line of Team Rocket Trio encounters throughout Kanto, in addition to tuteeship for the Surf move. Victor on Route 19 will teach Surf to any Pikachu under your OT registry if you chose Pikachu; it is not limited to the starter-selected Pikachu itself, but the Pikachu must have been originatively acquired by you for it to be a teachable tutee.