The Jirachi Quest is one out of many additional, not story related, Legendary Pokémon quests and is the only way to catch the Mythical Pokémon Jirachi.

Accomplishment of the dex requirements

In order to move forward at the Jirachi quest, you need the owned data of all possible Kanto, Johto, Hoenn Pokémon (Including Mew and Celebi, seen data only for other legendaries) on your Pokédex.
You also need at least 210 different evolutions in your Pokédex. Spawns for all Pokémon can be found in their specific pages.

More specific information regarding owned and evolved Pokémon and their mechanic regarding the Dex can be found in the Pokédex page.

The next step is to get Castform‘s seen data. For that, you have to fight a nameless scientist located in the Weather Institute at Route 119A. The Scientist can only be fought once but the seen data gets saved anyway, win or lose. 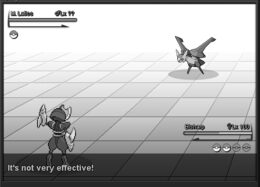 A battle against a mega evolved Latios

Firstly, to be able to fight Latios and Latias, in order to get the seen data of them, you have to interact with the TV in the Players House in Little Root Town. That will result in a dialogue which shows you that the Red Pokémon is still roaming around — Latias.

Before you start hunting for the seen data, you should visit Professor Birch located in is Lab, also in Littleroot Town. Birch will unlock the Moon for you, in case you haven’t yet. You can now travel to the Moon with a fee of

After this small stopover, you can go for the seen data of Latias now. However, it can be at ten possible locations.

Once you have found the right location, interact with it. Latias will evolve into Mega Latias and a battle will start. Mega Latias has a level around 100-120. Even if Mega evolved, you will get the seen data of Latias once you started the fight, the outcome of the battle does not matter. When the battle is over, you have to go back to the Player House and interact with the TV. Now, a Blue Pokémon is roaming around — Latios. Latios also has ten possible locations, same as Latias.

Same as with Latias here, once you interacted with it, it will mega evolve into Mega Latios, and a battle will start. The seen data will be from Latios.

The three Regis and Rayquaza

The next goal is to get the seen data of the three Regis — Regice, Registeel and Regirock, which are located in their respective caves. As usual, the seen data will be obtained with a battle against the Pokémon.

Once you have battled the three Regis, you can now aim for the seen data of Rayquaza which is located at the roof of Sky Pillar.

The last seen data you have to obtain are from Groudon and Kyogre. Beating Team Magma leader Maxie and Team Aqua leader Archie will result in obtaining the seen data of these Pokémon.

To battle against these bosses, it is required to have 6 level 100 Pokémon in your party. Both boss Pokémon are level 120. These battles are also one-time fights. The seen data of the Pokémon should be obtained once you started the battle. To conclude, it does not matter if you win or lose. However, you won’t have a chance to get the extra rewards in case you lose. which are a Carvanha from Archie and a Numel from Maxie.

Battle screen of the Jirachi battle

Now you can finally aim for Jirachi and catch it. The Moon should be unlocked now, as it was previously suggested to unlock. If not unlocked, you should do so now.

Jirachi is located on the Moon. To get on the Moon, you have to travel to Mossdeep City, enter the Space Center, and talk to the old man at the second floor, who will give you the option to travel to the Moon for

Once you’ve reached the Moon, you have to pass some caves in order to reach the shiny stone on a hill. The pathway is the same one used for Deoxys, in the past. Interacting with the shiny stone will teleport you to the Wish Room with Jirachi in the middle of it. Interacting with Jirachi will result in a fight and the chance to catch it. In case you were unsuccessful in catching Jirachi, you can earn another chance to catch it again by beating Nikola.