The Goldenrod Radio Tower quest is a compulsory quest in Johto in Goldenrod City.

While this quest does unlock the eponymous tower by virtue of Sergeant Raul’s displacement (the NPC occluding the doorway), its compulsority is due to Goldenrod Gym‘s initial inaccessibility; until this quest is completed, the gym will not be available to challenge Whitney for the Plain Badge, meaning that Johto’s successional line of gyms will not be progressible without this antecedent.

Sergeant Raul’s conferential exchange with Whitney outside of the Radio Tower.

Speak to Sergeant Raul afront the doorway of Goldenrod Radio Tower; he will synopsize the current plight with Team Rocket, who have reportedly hijacked the aforementioned tower’s radio-broadcasting service in order to swindle Pokémon on the pretextual advertisement of a daycaring service, and he will provide all known investigatory leads. You can also speak to Whitney if you wish for her to narrativize supplemental information, since she was a victim of it, but it is not progressionally necessary.

Raul will enjoin you to find the suspect: Radio Director Gavin; he can be found in the passageway of Goldenrod Underground Tunnel. While he will give prevaricating answers, your interaction with him will allow you to report this to Sergeant Raul for the next step of the quest. 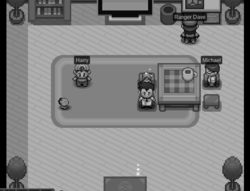 Michael, the manager of Goldenrod Department Store, in his residential house.

After reporting your observation to Raul, he will advise you to infiltrate Goldenrod Underground Warehouse, which he inferred is the clandestine operational base of Team Rocket in Goldenrod City.

Firstly, you will need a lift key to access Goldenrod Department Store‘s basement; this can be obtained by speaking to Michael—the store manager—in his house. He resides in Goldenrod House 2, which is the only accessible house immediately northwards of the Bicycle Shop.

Security Officer Eric—presumably a covert Team Rocket agent or one who has been illicitly paid to work for them—will not let you pass; therefore, you will need to lace the Fresh Water with soporific agents by using the Sleep Powder or Spore moves when prompted.

The most recommendable avenue of obtaining a Pokémon with the requisite moves is by obtaining a Caterpie on preceding routes (the highest-leveled ones of then-reachable areas are in Ilex Forest from levels 5-9), and evolving it into a Butterfree; Sleep Powder will be learnable to it as early as level 13. If you already have a level-13-plus Butterfree without Sleep Powder in its moveset, it can also be acquired by the move-relearner in Goldenrod City for a fee of

Once you proffer him Fresh Water, select your on-hand Pokémon with the sleep-inducing move, and then Eric will fall asleep momentarily; thereafter, you can proceedingly enter Goldenrod Underground Warehouse.

Once you have culled all-six of the keys, you can now unlock the multi-keyslot door to the captain’s office. 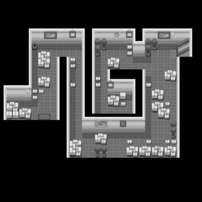 The Pokémon abudctees are emboxed in the crates that are redly ensquared in this annotative picture.

Enter the underground warehouse cautiously; two Team Rocket agents are segmentally patrolling it, and they will expel you from the premise if you walk within eyeshot of them (5 tiles within them of the direction they are actively facing).

The duplicitously abducted Pokémon are emboxed within the crates; see the pictorial annotations to the right to know which ones they are stored in. Some crates may be easier to find depending on how avoidant you want to be of the patrolling Team Rocket agents; but regardless of which crates you extricate the Pokémon from, you will be allowed to proceedingly move past the area once you have found 5.

After you have found 5 abductees, enter the southwestern doorway to move into Goldenrod Underground Basement.

Annotations of all levers in the Goldenrod Underground Basement puzzle.

Now that you have reached the heart of the operational base, you will need to negotiate yourself through a sequential series of doorway switches in order to reach the partition of the room where Radio Director Gavin is.

Follow the sequential steps below to successfully navigate your way through.

If you wish to reset the sequence, you can do so by activating the outlying lever outside of the rooms; this will re-initialize the sequence so that all doorways are restored to their original state. It may quicken the step if you are avoidant of the Team Rocket grunts; however, battling them can be potentially rewardful as it pertains to their experience-points and Pokémoney payouts.

Now that you have reached the partitional room of Radio Director Gavin, you can battle him to complete the infiltratory process; his lineup is tabulated below.

Thereupon defeating Radio Director Gavin, report back to Sergeant Raul for debriefing. As you start to recount it, he will report that he is already well-aware of your investigatory triumph, as all Team Rocket agents and accomplices have already been apprehended.

After your exchange with Raul, speak to Whitney; she will exultantly thank you for your vital role in the investigation, as her Pokémon are rightfully restored to her ownership. She will then vanish as she heads back to the gym.

The quest is now complete; you can access Goldenrod Gym!