The Cerulean Cave quest is an additional, non-story related quest. The quest can be done in order to gain access to Cerulean Cave, any Daycare Center and to be able to catch many Legendary Pokémon amongst other things.

Dragon Club and the Dragon Medallion 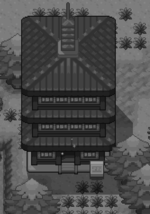 To start the quest, you have to talk to the police officer in front of the Cerulean Cave.

The first goal you have, is in Johto and is to get the Dragon Medallion which is needed to challenge the Dragonite blocking the way to the lowest floor of Dragon’s Den. For that, enter the Dragon Club and buy a Blackthorn Club Card for

After that, you have to solve the third challenge of the Prize Giver, which is to obtain at least 240 different Pokémon. A Pokémon counts as obtained when you get the Caught Data in your Pokédex

As reward you will archive the Dragon Medallion. The Price Giver also offers you to solve two different quests which require to obtain 70 and 150 different Pokémon. Since this goals are automatically solved with the goal of the Dragon Medallion, you can receive the rewards of an Everstone and an Eviolite.

Once you have obtained the Dragon Medallion, you are able to fight the Dragonite at Dragon’s Den B1F. It has a 24 hour cooldown in case you lose. If fainted, you now have access to whole B1F and be able to pass to Lance. It requires only level 100 Pokémon in your team to be able to battle him. Once you have beaten Lance, you can not re-challenge him, you have finished the quest and he will disappear. Otherwise you can immediately re-challenge him.

You now have access to Cerulean Cave and be able to move to Boss Naero.
You also have archived some requirements for following: