The Celebi Quest is one out of many additional, not story related Legendary Pokémon quests and is the only way to catch the Mythical Pokémon Celebi.

The Scientist, called Alexander will be found in the Puzzle 2 building, and thus is will be necessary to bring a Spinarak. After finding him, he will explain that he’s looking for an important item, and wants the player to find it for him.

After speaking to Scientist Alexander, it will now be possible to examine the Pokéballs at the bottom of each Puzzle room. The item he is looking for is in the Puzzle 4 building, and thus it will be necessary to bring a Rattata and reach the building through Union Cave. At its bottom, the G.S Ball, the item he is looking for, will be the northeast item.

After bringing the G.S Ball back to him, he will reward the player with one of four different Fossils, namely the Helix Fossil, the Dome Fossil, the Claw Fossil and the Root Fossil. The Hoenn fossils being rarer, it is recommended to pick between the latter two. He will then ask to return later when he has fixed the G.S Ball, putting an end to the first part of the Celebi quest.

The second part of the Celebi quest begins by talking to Scientist Alexander back in Ruins of Alph Second Chamber. If the following requirements have been fulfilled, he will give the G.S Ball back to the player:

With the G.S Ball obtained, the Celebi quest will continue at Ilex Forest.

Accomplishment of the dex requirements

In order to move forward at the Celebi quest, you need the owned data of all all possible Kanto and Johto Pokemon (Included Mew, excluded other legendaries) on your Pokédex.
You also need at least 121 different evolution’s in your Pokédex. Spawns for all Pokémon can be found at their specific pages.

More specific information regarding owned and evolved Pokémon and their mechanic in regards to the Dex can be found at the Pokédex page.

The first step of this quest is to obtain the seen data of certain legendary Pokémon.
The seen data of this Pokémon can be obtained by a battle. They appear as Pokémon sprited NPC’s and are one time battles. Once you have fought them, the seen data is saved, no matter if you win or lose.

While the three legendary birds don’t need specific requirements, besides having a Pokémon knowing HM03-Surf, Mewtwo can only be reached after doing the eponymous quest.
Articuno is located at Seafoam B4F, Zapdos at Power Plant, Moltres at Victory Road and Mewtwo in Cerulean Cave B1F in Kanto.
Moltres seen data should already be obtained in case Victory Road was already passed through.

Travel to Ecruteak City and talk to Scientist Ray at the Bell Tower Entrance. When you are Johto champ, he will ask you if you could help him and his researching team, since you have the Pokédex. Now head to Scientist Ray inside of the building and interact with him. He will ask if you return to him when you have the seen data of all three Legendary Dog’s. Fight your way through the Bell Tower Basement and interact with the three Legendary Dog’s, which will flee afterwards.

Once you fought them and got their seen data, head back to the scientist and report your findings.
Now you can walk to the Bell Tower Rooftop and get Ho-Oh‘s seen data.

The seen data of Lugia can be obtained by defeating Thor which requires you to be Johto Champion, or by fighting the Lugia Mini Boss behind Thor. You also need a Pokémon knowing Surf or a Surf Mount to reach him. Thor is located in Whirl Islands B4F and can be challenged on any difficulty to acquire the Lugia Seen Data.

Celebi’s seen data can easily be obtained by battling the Celebi NPC in Ilex Forest near the shrine.

After retrieving the G.S Ball from Scientist Alexander in Ruins of Alph, the next destination for the quest will be in Ilex Forest. The next thing to do is to examine the shrine in the middle of the path through the forest at any time ingame. The G.S Ball will react and the player will be teleported to the Chronos Forest, where he or she will be put to a few trials before being able to capture Celebi.

Before entering the Chronos Forest, make sure to prepare a Synchronize Pokémon, a Pokémon to weaken Celebi, a sufficient amount of Pokeballs, as well as a Surf method; many bodies of water are necessary to cross in order to reach Celebi.

Upon entering Chronos Forest, Time Guardian Charles will present the player the first trial before getting Celebi. The trial consists of finding a total of 10 Time Shards, all of which are hidden items spread throughout Chronos Forest Area 1.

The location of each Time Shard is shown on the area map below.

Once all 10 Time Shards have been obtained, it will be necessary to hand them to Time Guardian Charles, after what the two Time Guardians blocking the way to the next area will disappear. Charles will also notify the player of how many Time Shards he or she has obtained by speaking to him. 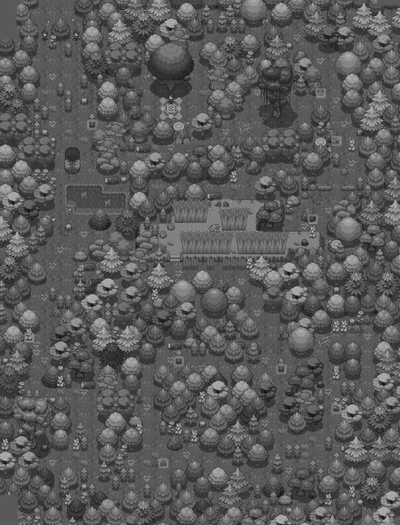 The second trial will be explained by Time Guardian Topan. The goal is simple: reach the other end without being seen by the many Time Guardians in the way. If they see the player, they will kick him or her back to the end of Chronos Forest Area 1, as such there is no significant penalty by failing the trial.

Celebi will be located in the middle of the last area, the Lake of Shine. While there are no particular trial here, there are a couple short mazes to cross in order to reach Celebi.

Once in front of Celebi, talking to him will automatically initiate a battle in which he can be captured. The Celebi will be level 30 and know the moves Ancient Power, Magical Leaf, Safeguard and Recover.

With Celebi fought, Time Guardian Charles back in Chronos Forest Area 1 will return the player back to Ilex Forest.
In case Celebi was not successfully caught, you have the chance to catch it again by beating Nikola.