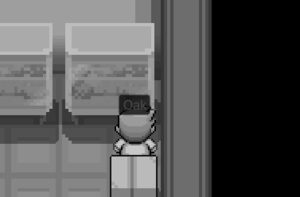 Bosses, oftentimes phrasally referred to as boss NPCs, are transcendent battle NPCs that can be challenged by qualifying players for an assortment of high-end rewards and feature-unlockings.

Since bosses constitute the strongest NPC-deployed lineups in the game—having maximal stats attainable by players—they are considered the fulcrum of the PvE (player versus environment) aspect in Pokémon Revolution Online.

As of December 2018, scripters began to revamp already existing bosses. The reworked bosses include changes to their team lineup, rewards, player requirements, and Pokemons’ effort values and levels. The aforementioned bosses now have three difficulty levels for the player to choose from.

Boss NPCs are identifiable by their distinctively red— or purple-colored names on the overworld, while those with red names are ‘normal’ bosses and those with purple names are ‘superbosses’ which are considered to be much more difficult. Some bosses might not be visible to the players until their prerequisites have been satisfied.

The main requirement is to be champion of the region the boss stays on. The scale of the rewards is controlled by three different difficulty grades — Easy, Medium and hard. Some bosses also have a hour requirement, but only if they are connected with special events such like catching a legendary Pokémon.

When challenging a boss on Medium or Hard mode, players are not allowed to use more than one of the same Pokémon on their team. They must be different species/have different national dex numbers. For example, you cannot have more than one Sharpedo in your lineup to challenge a boss.

Tier 1: A random amount of common items which depends on the boss, like Focus Sashes, Weakness Policyies, Air Balloons,Lum Berries or Sitrus Berries.

Tier 2: A random amount of more valuable items, mixed with some high valuable rewards depending on the boss, like PP Up’s, Rare Candy’s, Small Train Ticket or Corphish.

Tier 3: Rare Pokémon depending on the boss, like Gible, Dratini, Bunnelby or Scyther.

Once a you have beat a boss three times in a row, you can choose one extra reward out of a Pokémon prizeset of four; they vary among bosses.
The rewardable Pokémon on the hard mode are considered as slightly more valuable than those you may get on the Medium mode.

Below are all the currently available bosses. Click on the name of the boss to gain more information.

Quest bosses appear during either the story or a quest. Some of them will be repeatable untill you win, others will only happen once whatever the outcome.

Repeatable Bosses are a part of the PvE endgame. You are limited to 20 bosses from this list per week.

All bosses on the list below are discontinued bosses, meaning that they previously existed but were removed from the game, made inaccessible, or have been substantially reworked.

Many bosses are also multifunctional in the sense that they may serve as vendors or as move tutors. In these cases, they typically will require being battled at least one time before their commercial services are accessible; this entails that the requirements are satisfied, or they may not have any accessibly serviceable feature.

Each account is limited to 20 rechallengable bosses every week; the timer on this is a global cooldown that resets every Monday at 00:00 (midnight) GMT+0.

Most bosses also have an individual timer are rechallengable after 12 days; the main exceptions are quest-compulsory bosses, which either cool down after 2 hours or are not rechallengable at all, as the quest has progressed. 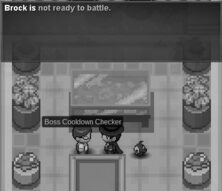 The cooldown-checker performing a confirmatory check on Brock’s status.

The cooldown times for your bosses can be checked by speaking to the cooldown-checker in Celadon Office 2F, Goldenrod City House 1, Slateport City House 1, or Canalave City House 1; they will let you know whether or not they are ready.

If you want the exact time left remaining on the cooldown of a boss, you can interact with the boss in question; they will say how much time is remaining before they are rechallengable when asked.

If you are member in the Official PRO Discord you can also use the command ^cooldown boss ‘Player Name’ server to get a list of Bosses and their cooldowns.

The boss rework was issued to improve the boss NPC’s in general. All bosses are coded in Python now and not in Xanascript anymore, which gave new opportunities. One of the biggest benefits is, that the Python script sees when if the server crashed in order to not count a lose in case the player fought against the boss while the server crashed. In such a case, the player can simply re-fight the boss.

Bosses now are a challenge for players on any experience level who do enjoy doing bosses. There are three difficulty level every not story related boss has, which ensures that bosses are challengable for newer players and also be a chellange for those who have a high Pokémon knowledge. Boss teams are decisively reworked and only contain level 100 Pokémon. EVs and hold items do vary among other things — also depending on the difficulty level. Boss Pokémon are not restricted to only using one move when holding a choice item.

Although boss battles are mostly ruleless, there are several provisos to help regulate the level of difficulty. For such battles, players are prohibited from using: